When Indian companies turn acquirers, is wealth created for shareholders of the acquiring firms? 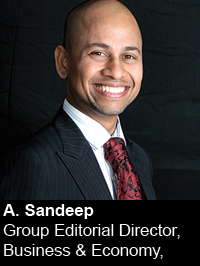 A. Sandeep, Group Editorial Director, Business & Economy, presents a quantitative study on acquisitions by Indian companies involving both Indian and Foreign targets. Do such acquisitions destroy value (as has been commonly reported by scholars and researchers in the past)? And do market sentiments alone influence the change in market value of buyers, thereby negating the effect of the very acquisitions?

Globally, the outcomes of mergers and acquisitions (M&As) have been analysed at length. However in the Indian context, due to factors such as lack of data availability in the public domain, lack of transparency in deals et al, such studies have been rare. More so, studies discussing the outcomes of acquisitions by Indian companies alone have been the rarest. We developed a methodology to collect and analyse data on acquisitions by Indian companies. We had two scenarios: (a) Indian companies buying Indian targets (referred hereon to as India-India); and (b) Indian companies buying Foreign targets (referred hereon to as India-Foreign). The performance of each acquirer on a certain parameter (market capitalisation) was tracked down and mapped during the pre and post-deal periods. Our final conclusions were arrived at by studying 167 deals involving Indian firms as acquirers. We focused on the importance of using m-cap as a performance indicator. Critically, checks were introduced on whether statistical significance differences exists between the changes in m-cap of acquirers and changes in the standard index (BSE Sensex) under various control environments (like Sensex and non-Sensex acquirers, various time windows et al). 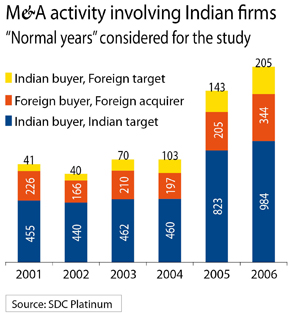 The results we observed turned out to be quite opposite of what studies on acquisition globally have stated – that acquisitions erode wealth for the acquirers’ shareholders. The mirage of synergy playing a role in destroying hopes of acquirers’ shareholders to gain wealth have been identified and proven by a number of academic scholars, consultants and research firms. Most of them use changes in financial metrics (like market capitalisation) to arrive at a conclusion. In the NBER Working Paper titled, ‘Do Shareholders of acquiring firms gain from acquisitions? (2003)’, scholars Sara B. Moeller (Cox School of Business, Southern Methodist University), Frederik P. Schlingemann (Katz Graduate School of Business, University of Pittsburgh) and René M. Stulz (Fisher College of Business, Ohio State University), state, “We examine a sample of 12,023 acquisitions by public firms from 1980 to 2001. Shareholders of these firms lost a total of $218 billion when acquisitions were announced. Though shareholders lose throughout our sample period, losses associated with acquisition announcements after 1997 are dramatic.” In another study for The ESRC Centre for Business Research, University of Cambridge, titled, ‘Do takeovers create value? (2002)’, researchers Magnus Bild, Mikael Runsten (Stockholm School of Economics) and Paul Guest and Andy Gosh (Centre for Business Research, Cambridge University Judge Institute of Management), report that, “on average, acquisitions destroy roughly 30% of the acquirer’s pre-acquisition value.” According to James Heskett, Baker Foundation Professor, Emeritus, at Harvard Business School, “Acquirers often end up bargaining for a seat on the loser’s bench.” In his paper titled, ‘Should We Brace Ourselves for Another Era of M&A Value Destruction? (2004)’, he sums up thus, “Research tells us that the short-term value in an acquisition accrues primarily to shareholders of acquired companies. On the other hand, short-term value is more often destroyed than created for shareholders of acquiring organisations. As many as two-thirds of all acquirers fail to achieve the benefits planned at the outset of an acquisition. In the end, M&A is about buying more volume. It is a flawed process, invented by brokers, lawyers, and super-sized, ego-based CEOs. Acquisitions are a macho exercise, not an intellectual one. Think World Wrestling Federation, not a chess tournament.”

In our study, we conclude that acquisitions – whether it be India-India or India-Foreign – create significant value for the acquirers’ shareholders. This brings us to the surprising conclusion that for CEOs of Indian companies, inorganic growth strategy is value-creating.

Also, we tested the influence of the general market movements on the m-cap movement of the acquiring companies in question. Under many-a-situation, T-tests results convinced us to reject our null hypothesis (Ho --> md = 0, where md is the difference between the statistical means of the two samples under consideration. In other words, the null is that there is no statistically significant difference between shareholder wealth change and Index change).

This paper is therefore an attempt to filling some present gaps in what has been studied, documented and analysed so far in the discipline of acquisitions in India.

We adopted a systematic approach to the study. Based on past scholarly researches on the subject, the following decisions were taken at the start: 1. Decision on time windows (t-2, t-1, t, t+1 & t+2); 2. Decision on collection of samples (India-India deals and India-foreign deals); 3. Decision on using significance tests.

To collect data, we used databases including Thomson Reuters M&A records and Grant Thornton’s M&A Dealtracker. Only those deals that fell under the category of “acquisitions” were selected (to avoid diluting the focus/object under study by taking a combine of mergers and acquisitions). The deals under study also strictly involved acquirers that remained publicly listed during the post-deal event windows taken.

In order to understand the outcome, we went with the most widely-held view that since the CEO is the public representation of the company, his performance is displayed in the company’s stock performance, and whatever deal-making happens, should be in the interest of maximising shareholder wealth. Therefore all changes in post-deal performance should be reflected in the company’s market capitalisation, a view also adopted by G. Wan Ng (2007), Martin Sikora, Wharton School of Business (2005), Holthausen (2005), Mauboussin (2010), Moeller, Schlingemann and Stulz (2003), and many more scholars in their respective works.

To test for significant differences between means of two sets of samples, we conducted T-tests in order to verify whether it was actually the general rise/fall of market trading sentiments that contributed to the rise/fall in the shareholder wealth of the acquirers [a practice adopted by researchers like Moeller, Schlingemann, Stulz (2003), Maditinos, Theriou, Demetriades (2009), Gersdorff, Bacon (2008), and others]. We took a precision ceiling of 95% in the process (the alternative is two-tailed and represents a 95% Confidence Interval, C.I.). The assumptions underlying this paired sampled t-test are: 1. Observations collected are independent of each other; 2. The data points are normally distributed in the population; and 3. The null hypothesis follows the strict form of “neutral/control” hypotheses used in statistical studies, and corresponds to a general or default position.

There is a spike in deal making during times when markets experience a boom (Mauboussin, 2010). Our intent was to include “normal economic” circumstances. The choice of sample collection years was therefore taken between 2001 and 2006. The reason being that first, it gives us a reflection of a large number of “normal, recent business” years to collect samples from. Second, it takes care of the exclusion of the effect of post-bubble in the Information Technology sector and the pre-bubble period and slowdown in the Indian economy – which can be understood by the very fact that M&A activity in India rose abnormally from $20.30 billion in 2006 to $51.11 billion in 2007, and then fell to $30.90 billion in 2008 before plunging to $16 billion in 2009 – the year slowdown struck the global economy – thereby giving us “normal business years” as time range to collect data from.

1. Market capitalisation change test Our findings of the tests that give a measure of shareholder wealth change in the case of India-India deals are shown in Table 2, and those for India-Foreign deals are shown in Table 3.We find that shareholder wealth is created when Indian companies turn acquirers, irrespective of whether the targets are foreign or Indian companies. Our analysis reveals that in the case of both India-India and India-Foreign acquisition samples, m-cap of acquirers rise, thereby going against observations made globally. In the case of India-India deals, the sample of 76 acquisitions create value under all four event windows: t-2 to t+2, t-1 to t+1, t to t+1 and t to t+2. There is more shareholder wealth created during the first year post-merger (t to t+1) as compared to two years post merger (t to t+2). Maximum wealth is created during the largest event window of four years, t-2 to t+2. Deal size-wise findings are quite similar. In Level 1 (value < $10 million), Level 2 ($10 million = value < $50 million) and Level 3 deals (value > $50 million), the highest appreciation for the acquirers’ shareholders are noted for the event window t-2 to t+2. This event window also corresponds to the highest average (per buyer) increase in shareholder wealth created by acquirers. Interestingly, the effect of the acquisition is also found to be higher in the first year post-deal, as compared to two years post-deal.

In the case of India-Foreign deals, the sample of 91 acquisitions create value under all four event windows. In Level 1 (value < $50 million), Level 2 ($50 million = value < $250 million) and Level 3 deals (value > $250 million), the highest appreciation for the acquirers’ shareholders are noted for the event window t-2 to t+2. The favourable effect of the acquisition is found to rise as a function of time over the two years following the deal, with rise in m-cap of acquirers being higher in the t to t+2 period when compared to the t to t+1 time frame. 2. Significance testsAfter measuring changes in shareholder wealth, we proceed to check whether the acquisitions might actually have ‘any’ role to play in the changes in m-cap of acquirers..

For four different event windows, we checked for the significance in difference between the sample means of two given samples:
(1) The change in market capitalisation of acquirers during a certain event window (t-2 to t+2, t-1 to t+1, t to t+1 and t to t+2); and
(2) The corresponding change in Sensex during the same event window considered in (1) above.

The Sig value (p) turns out to be less than a (0,05) in all the four event windows therefore we reject the null hypothesis. Also, the critical value of t arrived at does not fall between the critical range (tc). Therefore, we reject the Null in favour of the Alternate hypothesis. We conclude that there exists a significant difference between the means of the change in the two variables. Therefore, the change in m-cap is influenced by factors other than the change in Sensex, and one of the possible influencers could be the acquisition of a target.

In order to understand whether the inclusion of Sensex companies in the buyer group in the India-India analysis influenced our Significance test results, we divided the buyer group into two segments, depending on their inclusion in the Sensex during the announcement of acquisition.

Acquirers belonging to Sensex: Only in one time window (t-2 to t+2) was the null rejected. Therefore in a majority (75%) of event windows, it was proven that there exists no significant difference between movement of the Sensex and acquiring companies. The results turned out as expected.

Acquirers NOT belonging to Sensex: Null is rejected in all time windows. We conclude that in all four windows, there exists a significant difference between the means of the change in the two variables. Therefore, the change in m-cap is influenced by factors other than the change in Sensex, and one of the possible influencers could be the acquisition of a target.

The Null is rejected in two (relatively shorter) event windows: t to t+1 and t-1 to t+1. We conclude that in these above stated intervals, the change in m-cap of acquirers is influenced by factors other than general market movement/sentiment, and therefore the very acquisition could be an influencer.

Acquirers belonging to Sensex: Only in one time window (t to t+1) was the null rejected. Therefore in a majority (75%) of event windows, it was proven that there exists no significant difference between movement of the Sensex and acquiring companies.

When Indian companies turn acquirers, is wealth created for shareholders of the acquiring firms?

Email ThisBlogThis!Share to TwitterShare to FacebookShare to Pinterest
Labels: A Sandeep, Business and Economy, IIPM, Planman