PLAN ‘A’ FOR NARAYANA MURTHY WAS ABOUT MIDDLE CLASS VALUES & GROWTH PROJECTIONS BEFORE HE REALISED THAT ENTREPRENEURSHIP IS THE KEY TO POVERTY ERADICATION IN INDIA. THE VALUES STAYED, BUT A LOT ELSE CHANGED THEREON 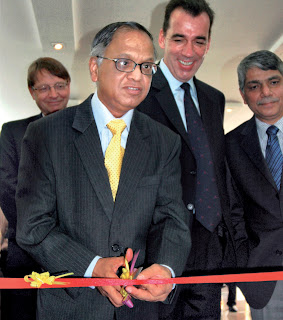 Turner at a function where a few new members were being inducted into the United Nations Foundation’s board of directors. Our conversation was pretty soporific, as can be expected of such functions where one is loathe to utter politically incorrect statements. Ted suddenly stopped an individual who was passing by, and introduced him to me, mentioning, “Meet the newest board member of the UN Foundation, Narayana Murthy.”

The incident remains in my mind purely because of the fact that that was my first meeting with the legendary cult entrepreneur Narayana Murthy. Years later, talking to Murthy on critical issues of entrepreneurship, I realized that here was one individual who would be considered one day soon - if not already - the father of India Inc. The commitment, sincerity and dedication that Murthy has shown to not just Infosys but to the nation, in terms of bringing India on the world map and ensuring that the fruits of India’s development flowed down to the lower sections, is without argument in the league of the likes of JRD Tata.

For an entrepreneur, whose company has scaled unprecedented heights to become one of India’s most profitable companies in a remarkably short span of time, the values that have driven N. R. Narayana Murthy, now Chairman-Emeritus, Infosys in his entrepreneurial journey are quite counter intuitive – they are, in fact, values that the Indian middle class would relate more to, rather than the corporate honchos who have defined Global Inc. throughout history. These values were indeed a part of his upbringing in a middle class Kannada Madhava Brahman family. He grew up to learn that an uncompromising focus on education and respect comes before everything else. 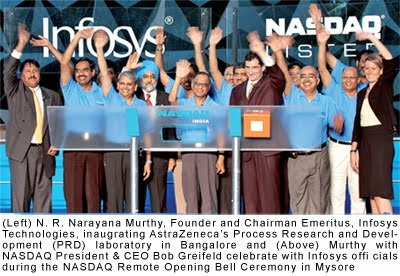 And if you had some acquaintance with Murthy in the initial years of his career, his life seemed like an immaculately planned middle class growth path even then – with the expected ingredients of academic excellence, linear growth and the much cherished job security; in short, nothing extraordinary. He completed his B. E. in Electrical Engineering from University of Mysore and his M. Tech from Indian Institute of Technology. Moreover, Murthy was a socialist at heart, and seemed hardly the kind of person who could set up a multi-billion dollar global IT company.

But a few unexpected experiences changed Murthy’s mindset tremendously, and unleashed the technical brilliance and entrepreneurial dynamism that have been part of his personality since. The first was a meeting with a famous American computer scientist when he was a graduate student in Control Theory at IIT on the future of computer science. The meeting was so insightful that Murthy got committed to computer science for life. Secondly, a trip to Europe convinced him that rather than his cherished Leftist ideologies, capitalism & entrepreneurship were the most practical solutions to India’s poverty problems.

His first venture Softronics was a failure and he terminated it fairly quickly. But the learnings from that venture helped him immensely when he exited en masse with his team of engineers from Patni Computers and a loan of Rs.10000 from his wife Sudha Murthy, to form Infosys in 1981. They were – a) you are a successful entrepreneur only if the market is ready for your idea and b) it is important to have a team that has a common and an enduring value system. The consequence of the first was that Infosys was keenly focused on exports from the beginning since Murthy had realised that the Indian market wasn’t ready. And the consequence of the second was that he carefully chose his A team, the team that we all now know as the seven co-founders of Infosys. These co-founders made up their mind since the beginning that they would seek respect first from all stakeholders by adopting the highest standards of business excellence, and that money would then flow in automatically. Murthy himself additionally drove home the firm belief in equity, and gave all his colleagues 15% equity in the company, even though they were just engineers with 1-1.5 years of experience; a decision that would arguably not find any precedent in business globally.

Even if the idea was right, anyone in his right mind at that time would have been quite convinced that the time and place was horribly wrong. They were planning to export software, but they were still operating from India, where the environment for business was far from ideal in those days. They had to import their first computer and MNC banks were not ready to lend them money for the same since they were start ups. Taking a telephone connection and even importing a computer took 2-3 years. There was no data communication and they used to fax source code (imagine what a client would have felt!) to the US. Six of Murthy’s colleagues went to the US to bypass the constraints in India and interface with clients. RBI approvals for overseas travel took 8-10 days, and if you got any foreign exchange earning, 50% went to RBI. Murthy, in fact, convinced clients to send him money on the 28th or 29th of every month. It was then that he could send his overseas colleagues their maintenance allowance after giving 50% to the RBI. 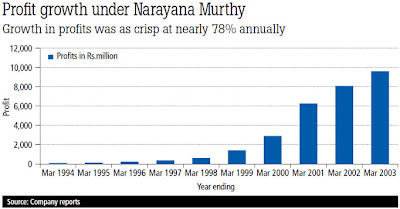 Through all these difficulties, Murthy held steadfastly to the belief that his idea was right, and the value that his company was providing to customers was world class. And he was confident that the difficulties would ultimately give way. However, amidst a difficult initial decade (Infosys grew from an annual turnover of $14000 to $2 million between 1981 and 1991) members of his team lost hope, and found themselves drawn towards a $1 million offer that was made for the company in 1989. Murthy placated them and assured them that the future was going to be much better. He even offered to buy out their stake.

However, even Murthy would not have comprehended the not-so-small mercy that India Inc. had in store in the form of liberalisation in 1991. Infosys truly found its bearings in the new and far more enabling environment. A view at some numbers will help put this in perspective. When Murthy stepped down as CEO, revenues of Infosys stood at Rs.26.03 billion compared to Rs.290 million in 1994 (Infosys got listed in 1993). That means a CAGR of a mind boggling 75.44%! Profits were even better at Rs.9.58 billion in FY 2001-02, a CAGR of 77.79% during the same period.

As he took the company on its new trajectory, Narayana Murthy’s leadership skills were put to test time and again, and so were his value systems. In 1994, for instance, one of their largest customers GE wanted to renegotiate rates. Murthy refused and the contract was terminated, which led to a severe cash problem as GE contributed a huge 25% of Infosys’ revenues at that time (in fact, that’s when Infosys decided that it would always keep enough cash for one year’s salaries in its reserves, a diktat it follows till date). Besides, Murthy has stood by the belief that benchmarking oneself with the global best is a necessary end, as that enables you to compete in global markets and also provide world class products to your domestic market. In that spirit, he inculcated a culture of innovation across the board at Infosys. Everyone had to innovate, be it a business head in the cabins or a sweeper on the floor, and his benchmark for the same was – think of ways in which you can perform your roles faster, cheaper and better than you do them today. Another aspect that reveals Murthy’s obsession with ensuring sustainability was his approach towards derisking. For instance, he and his successor Nandan Nilekani never travelled together on the same plane! Even the listing on NASDAQ signified two very prominent aspects of Infosys DNA – great ambitions and also the willingness to embrace the highest global standards, especially in terms of corporate governance. Under him, the Infosys Leadership Institute was set up, which ensures a steady pool of next generation leaders in the company, who can be promoted to senior positions when necessary. 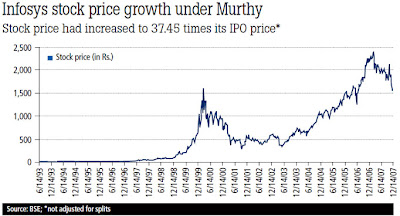 Infosys innovated time and again to ensure the respect of its clients. From 1992 itself, the company decided that rather than looking for short term gains, it has to build an institution for the long run. They invested in building state of the art physical infrastructure, attracting the right talent, embracing the latest trends in transparency and accountability (finance) and continuously enhancing productivity and quality standards. The sales team also innovated on ways to improve client satisfaction and deliver value. One of the most important innovations that Infosys brought in at that time was the global delivery model, and it was conceptualised and implemented by Murthy himself. The model is now immensely valued by clients as it enables Infosys to deliver its solutions from multiple locations across the globe and also enable round the clock implementation. Even today, Infosys earns around 98% of revenues from repeat customers.

In rough times and smooth, Murthy mostly remained his calm and humble self. He has believed in taking advice from all team members before taking any decision. But he also believes that when it comes to taking the final call, the leader has to trust himself. Today, it seems hard to believe, but when Infosys launched its IPO in 1993, the issue, which was launched at an offer price of Rs.95/share (it opened trading at Rs.145/share), was actually undersubscribed (how we wish we had a functional time machine!). The saving grace was Morgan Stanley, which acquired 13% stake in Infosys at that price. For posterity sake, the Infosys share closed at Rs.3557.85 on March 31, 2002, the month when Murthy exited operational responsibilities as CEO but continued as Chairman, hence growing by 37.45 times its IPO price. The Infosys share was trading at Rs.2225.40 on August 19 last year (Murthy stepped down as Chairman on August 20), with multiple splits en route. If you invested Rs.9500 for 100 Infosys shares in 1993, your investment would have been worth Rs.28.48 million (adjusting for the splits), a capital appreciation of 299743.37%! And add the regular dividends to that too.

One is reminded of the famous quote from Mahatma Gandhi, “My life is my message.” The success of a cult entrepreneur is driven by his passion and zeal for a vision, a passion that transcends short term blips, analyst forecasts, quarterly shocks, economic malaise, et al. For Murthy, his personal ‘larger than life’ vision (apart from the Infosys’ vision) was linked to eradication of poverty. Unlike the anti-capitalist mindset that prevailed in the 1980s, Murthy was convinced that entrepreneurship and capitalism are the ways to take India ahead. He calls Infosys his experiment in entrepreneurship. Even when he moved on from Infosys, he decided to devote his energies to fostering entrepreneurship in India, which led to the formation of his VC firm Catamaran Ventures.

Murthy not only set new standards in wealth creation, but also in terms of wealth distribution. The company distributed 27% of its equity among employees after its IPO, which was valued at Rs.5 trillion. Narayana Murthy has slowly and steadily given a huge portion of his wealth to charity through the Infosys Foundation led by his wife, and has believed in giving up equity as well over time. As on December 31, 2011, the entire shareholding of the Murthy family in Infosys was just around 4.37%. Perhaps the greatest learning that Narayana Murthy would like all entrepreneurs to take up is that the power of wealth creation is secondary only to the power of giving it away. And yes, his life has been a true epitome of this message.