THE MAN WHO NEVER LOST HIS VIRGINITY!

RICHARD BRANSON IS WIDELY RECOGNISED AS AN INSTITUTION IN HIMSELF ON THE SUBJECT OF ENTREPRENEURSHIP. AND AFTER INCUBATING NEARLY 400 VENTURES IN JUST OVER FOUR DECADES, THIS MAVERICK SERIAL ENTREPRENEUR JUST REFUSES TO GIVE UP

“I think entrepreneurship is our natural state – a big adult word that probably boils down to something that’s much more obvious like playfulness.”
Sir Richard Branson
Founder, Virgin Group

Entrepreneurial zeal can be fuelled by several innate desires. It could be about value creation, a love for a particular industry, a passion for contributing to society, testing your ‘personally defined’ limitations or even about building a name you can leave behind when you are gone. When we are talking about Virgin Group Founder Richard Branson, the above quote perhaps summarises his main driving passion best. His secret, at the cost of sounding overtly simplistic, is that he is an entrepreneur who loves entrepreneurship itself!

When my office caught up finally with him, to question him on his definition of what makes a cult entrepreneur, we had to also keep in mind that this was a man who had regularly written for 4Ps B&M for a long time preaching exactly that. Entrepreneurship is an affair that, for Branson, began even before he started the Student magazine at the age of 16, because he had already dabbled unsuccessfully with selling budgerigars and Christmas trees by then. From its inception in 1970 to today, the group operates nearly 400 businesses across mobile telephony, travel, financial services, leisure, music, holidays and health & wellness; with total revenues at around $21 billion in 2011. This means that the Virgin group has incubated nearly 10 ventures every year on an average!

Yet, you would not find Branson anywhere among the top echelons of the world’s richest. As per the Forbes’ Billionaires’ rankings for this year, Richard Branson’s net worth was estimated at around $4.2 billion in March 2012, and he was ranked #255 in the overall rankings. The same goes for their flagship company Virgin Media, which posted annual revenues of $6.1 billion in 2011. It was ranked #359 in the Fortune 500 list for 2010, dropped further to #374 in 2011 and dropped out of the list in 2012 altogether. But if you are mustering up a list of the world’s most iconic CEOs, I am willing to bet that Richard Branson will figure in the top ten in terms of recall. This is just one of the several inherent contradictions that have gone on to define both the man and the multi-billion dollar business empire that he runs. 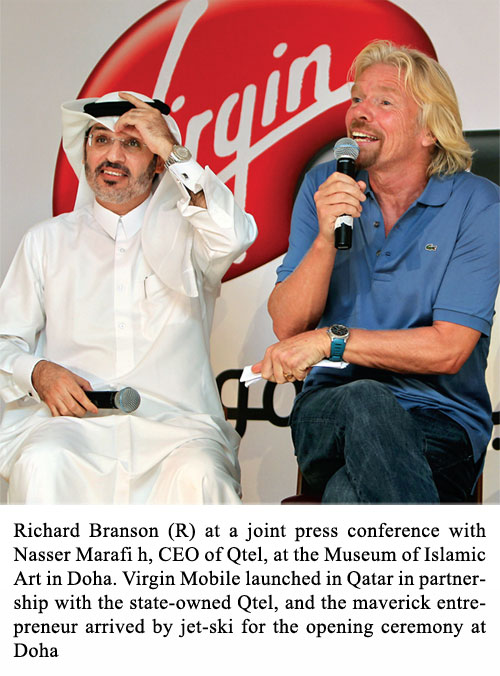 Is being outrageous a great branding ploy? If CEOs want to give it a shot, Branson is certainly the global benchmark, by all yardsticks. His publicity stunts are legendary; be it appearing for the Virgin Atlantic launch in pilot’s uniform, coming out in a bride’s dress with make up for the Virgin Brides venture, driving a tank up Fifth Avenue and destroying the Coca Cola sign at Times Square or jumping off the Palm’s Hotel Casino to celebrate the launch of the first Virgin American flight. His hot air balloon flights across the world are celebrated in aviation (and business) history. “Virgin Atlantic Flyer” happens to be the largest hot air balloon ever to take flight and it also broke a new record by being the fastest to traverse the Atlantic. When he came to Mumbai this year, he was quite a spectacle in traditional Indian dress on top of the common yellow & black Mumbai taxi. Branson has embraced the unconventional several times and often at great risk. The Sex Pistols is a remarkable case in point. The punk band had come up with a politically incorrect version of “God save the Queen” in the 1970s and faced a great deal of censure, with even their recording company A&M giving up on them. At that time, who else would dare to sign them up but Virgin Records? Not just that, Virgin, along with the band’s manager Malcolm McLaren, hit upon a novel idea to make the band play their anti-establishment number while on a ride across the river Thames and opposite the British parliament! Branson has often rubbed British Airways officials (the airline whose monopoly Branson sought to break when he launched Virgin Atlantic) on the wrong end. Off late, British Airways CEO Willie Walsh claimed that Branson is about to give up control of Virgin Atlantic, which posted a revenues of £2.74 billion and an operating loss of £80.2 million in the financial year ending February 2012. In response, Branson has publicly challenged Walsh and BA. He claims that if Virgin Atlantic closes down within five years, he will pay £1 million to BA staff, and BA must do the same for his staff if the airline survives (Walsh countered with a ‘knee in the groin’ wager).

Branson has a distinct preference for industries where Virgin can potentially disrupt the status quo. Conversely, he defies the concept of core competence in branding and says that Virgin is a ‘way of life’ brand, which he has deployed across businesses. Indeed, the man’s voracious appetite for risk (he is planning, quite seriously to take thousands of people into space as well as to the bottom of the ocean in the near future) and for overstretching himself in the public domain has contributed a great deal to what he is today. But there are other key aspects to the Branson magic. Arguably, the foremost among them is his managerial philosophy that puts employees first and customers second. Branson firmly believes that if employees are kept happy, they will, in turn, do what’s best for the business and its customers. In his interaction with my team, he described the key qualities of a successful entrepreneur, “Every entrepreneur should possess qualities of positive attitude in terms of understanding and solving employees’ problems, meeting their evolving needs on the professional front by communicating with them very often, being very transparent in terms of explaining the company’s new ideas of business strategies & policies, and seeking their opinion and telling them what is expected from them professionally to gain a competitive edge.” 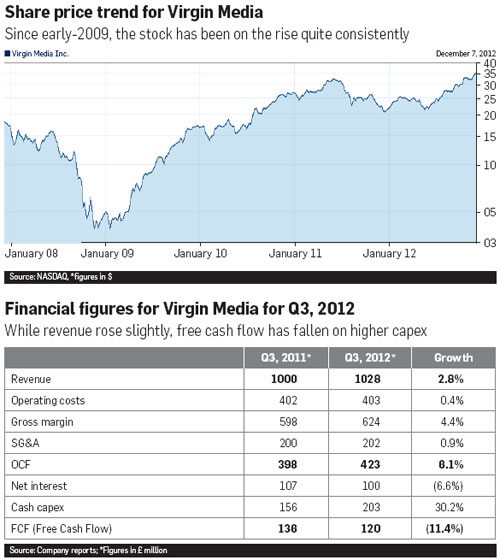 There is the obvious catch when you are so dangerously prone to living on the edge. The competition with British Airways was a serious drain on Virgin Atlantic’s finances. Richard Branson had to sell off Virgin Records, one of his most cherished ventures; for $1 billion to Thorn EMI, so that the proceeds could be invested in Virgin Atlantic. Perhaps the greatest debacle has been Virgin Cola, which was slated to compete with the likes of Coca Cola and Pepsi. The same was the fate of Virgin Clothes, and a lot of other businesses like Virgin Wine, Virgin Money, Virgin Vision, Virgin Vodka, Virgin Vie, Virgin Jeans and Virgin Brides failed to live up to expectations. He will also be exiting the railway business in UK by the end of 2012. Amidst these failures, Branson has defiantly stuck to his core philosophy with any new venture, which is, “S**w it! Just do it!” One of his key role models was a guy who failed (Freddie Laker, who was unable to dislodge British Airways with his low cost transatlantic airline). That says a lot.

However, he also believes that risks should be calculated ones and one must take care of the downside. For instance, when he started Virgin Atlantic, he bought a second hand plane from Boeing and kept the option of returning it if the business did not succeed. This way, he would only lose around six months of Virgin Records profits. He comments to my team on risk taking, “An entrepreneur is expected to keep tabs on the daily occurrences and changes in the industry where he functions. This is, so that it allows him to minimize risks involved in a future course of action, make higher profits than otherwise and make his company a tough competitor to beat.” Also, the group businesses are managed so that even if any business fails, it does not affect the others severely.

Ultimately, like all truly successful entrepreneurs, Branson believes that a line has to be drawn on wealth creation and the ultimate aim is to give back. On Mallya’s continuing problems, he recently told a leading Indian TV channel that rather than being criticised, Mallya should be credited for all the efforts he is making to rescue the airline and that perhaps he (Mallya) was ahead of his time in the Indian market. But most notably, Branson pointed out that flamboyance might be one thing that Mallya would regret. He feels that entrepreneurs must earn respect for what they do for society and not necessarily for their material possessions. In fact, a major portion of Branson’s time and energy goes into philanthropic ventures. He is a trustee at a number of foundations and he decided to pool the energies of Virgin’s charitable foundations globally in 2004 towards the Virgin Unite initiative, which is aimed at tackling global problems like AIDS, TB and Malaria. He has also been active in global policy circles on the war against drugs, which he feels should focus on rehabilitation rather than prohibition.

Be it with adventure trips in a hot air balloon, investments in space travel or anti-AIDS programmes in South Africa, Branson’s life personifies one over arching message. A true entrepreneur should always be ready and willing to take up new & challenging ventures and move beyond his comfort zone to create circumstances to be able to take it up successfully (and manage the downside risk). And once you find a person who is more capable than you to take the business ahead, you should drop it like a hot potato and move on to the next exciting business prospect demanding your attention.
Pin It

THE MAN WHO NEVER LOST HIS VIRGINITY!